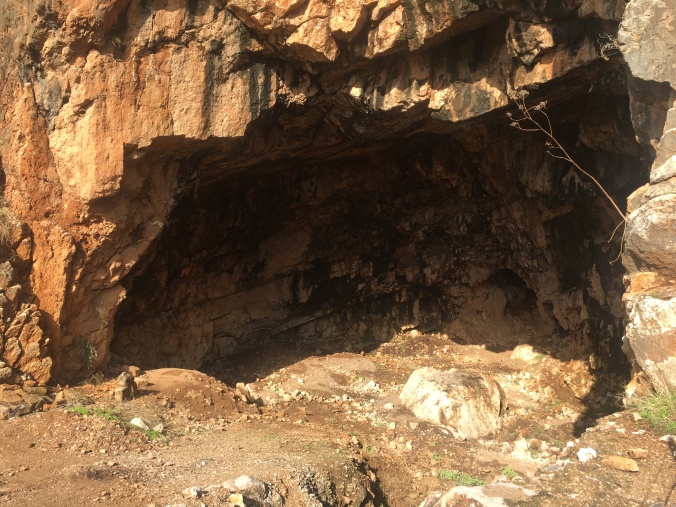 It’s not just what you say that matters, but how you say it.

People familiar with Gospel traditions note a clear turning point in Jesus’s ministry when you read Matthew, Mark, and Luke (but not John). That turning point, or hinge, is Peter’s “confession” of the identity of Jesus at the Messiah.

Mark’s Gospel sets the pattern. Right before this confession, Jesus heals a blind man. Readers have understood this blind man’s restoration of sight to be symbolic of the clarity of vision that Jesus was about to offer his disciples concerning his identity. In chapters 1-8, Jesus is a wonder working prophet whose deeds of power draw crowds up to 5,000+ and 4,000+ people. In chapter 8, Jesus takes his disciples away from all the excitement, up to Caesarea Philippi (where this post’s photos was taken), and in private, he asks them a simple question. “Who do people say that I am? (8:27). It was easy for the disciples to answer this question. It didn’t matter if they got it right or wrong because they were just doing a field report, and their answer is that people think Jesus is a prophet (8:28). They probably patted themselves on the back because they usually got the answer wrong, but they got a gold star for this one.

But then Jesus raises the stakes and makes it personal. “Who do YOU think that I am?” Only Peter is brave enough to answer. He says, “You are the Messiah.” (8:29). Jesus then goes on to describes himself as the Son of Man from Dan 7:13-14 who must suffer, be rejected by the Jewish leadership, be killed, and rise from the dead (8:31). The disciples are perplexed by this news, but they continue to follow Jesus.

Fast forward to Jesus’s appearance before the Sanhedrin where the high priest asks Jesus, “Are you the Messiah?” (14:61) in order to accuse him. Once again, Jesus describes himself as the Son of Man from Dan 7:14 (14:62), but this time, Jesus notes that, as the Son of Man, he will be vindicated as he ascends to the right hand of God. The high priest responds by tearing his clothes and the council condemns Jesus to death (14:64-64).

Now here’s the surprise: Peter’s confession and the high priest’s accusation are IDENTICAL in the Greek:

Both men are using “true words.” However, it’s only the context that tells us that one is a statement (Peter “told” [legei] him), and one is a questioning accusation (the high priest “asked” [epērōta] him). Context is everything. It can change a statement into a question. It can make something a confession or something into an accusation.

In today’s age, we have to be attentive to what is going on around us and ask why it’s occurring. We need to be paying attention to the wider context and our wider history. Context matters.  We need to understand that people are approaching things from different contexts, which determines their understanding of the issues. We need to listen more, read more, and dialogue more.

And when we speak, we need to remember that how we say or ask something matters.