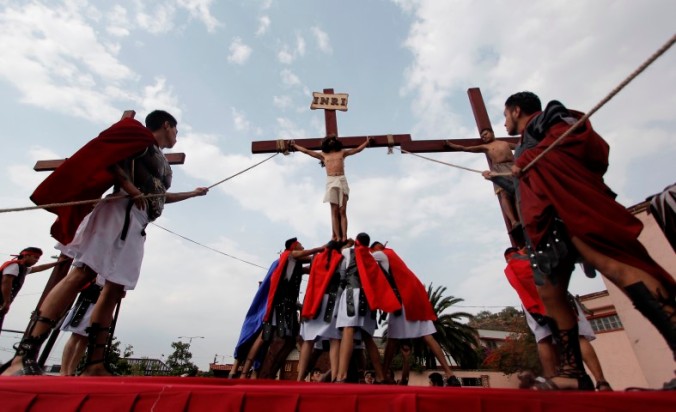 Reading the Bible can tricky. We may think passages are “straightforward,” but sometimes we end up filling in blanks that we don’t even realize. (The following is not meant as an argument supporting any of the below views; the purpose is an exercise in considering how our presuppositions impact our consideration of different opinions).

When you read about the centurion proclaiming Jesus to be the “son of God” (Mark 15:39/Matt 27:54) what do you hear? Take a moment to visualize the scene. What did his face look like? What was the temperature? What were the smells? What was the tone of his voice?

Did you hear this as a profession of faith? “Truly, this man WAS the Son of God!” That’s certainly the common answer. It can be supported by the parallel expression by Jesus’s disciples in 14:33. There are even Christian traditions (and Hollywood movies) about this. In this scenario, Christians see the centurion as “one of us” and read his words with empathy. But, this isn’t just a confession of faith, it’s a political statement. The Roman emperor was the son of God, whom this soldier had pledged his allegiance, and now this soldier has shifted allegiance by pledging allegiance to Jesus as the son of God. This statement is also an acknowledgement his own guilt—he “showed up for work” that day as a soldier to promote Roman peace and justice. He was just doing his job executing revolutionaries. He was a good soldier, a good leader. With this confession, he sudden realizes that his efforts to maintain the status quo had just killed the Messiah.

But, what if he was being sarcastic? What did Mark mean by painting a picture of this man looking at Jesus directly when he breathed his last (15:39) while making this statement. Could he have been saying, “Yeah right, this man was the son of god.” In this scenario, the centurion is seen as Jesus’s enemy. Why imagine this? Well, we need to explore the context of this scene beyond our flannel graphs. Remember, he’s a Roman soldier who has already pledged his loyalty to the Roman emperor, who was the son of God. We also notice that previously, the soldiers have said true things about Jesus, like being the “King of the Jews,” but did so as a mockery (27:29), so maybe he is continuing the mockery. As the centurion, he was THE man put in charge of Jesus’s execution, who ordered Jesus’s body to be nailed to the cross, who supervised his soldiers stripping Jesus naked and dividing his clothes, who watched religious leaders, crowds, and fellow criminals mock Jesus challenging Jesus to prove his identity as son of God (27:40). This was the man who watched Jesus’s mother and friends stare, powerless, as Jesus died. This was the man who watched Jesus die by asphyxiation. In this reading, the soldier remains hardened to the injustice of this execution, and sees his cause as a just means of promoting the Roman peace, and he is incapable of admitting his guilt.

But, what if he was just scared? This was a man who believed in omens and saw the sky darken and felt an earthquake. Returning to the disciples’ parallel confession in 14:33, we can note a key difference – their confession was accompanied with “worshiping” Jesus. However, Matthew tells us that the centurion (and the soldiers) with him were “terrified” by all the cosmic signs around them—at best, they thought the Hebrew god was displeased; at worst, they thought the world was going to end. So they made this declaration out of fear! Maybe they were saying, “Oh no! He really was the son of God (and his dad is mad).” It’s hard to speculate on the psychology of a character because we rarely hear inner thoughts in biblical texts. But maybe he was terrified because he just realized he’d made a huge mistake and participated in something unimaginable. Did he move past that fear? Did he change his life?

But what if this centurion’s confession was Christian propaganda? So Matthew has written a confession, but it’s said by a made-up character. Some people think that there is no way, this hardened soldier, who killed Jesus, could ever make such a statement. That this is fake news meant to help the nascent Christian movement present itself as not being a political threat to the Roman empire.

What about reflecting on how we read things? As we keep making and reading each other’s posts, how do we imagine our interlocutors? How are we interpreting their words? Do we see people as our allies? Enemies? Or something else? What would happen if interpreted people’s words with charity, assuming that they mean well, even if we disagree with their facts, sources, or arguments? How can we generate thoughtful dialogue rather than shouting matches?