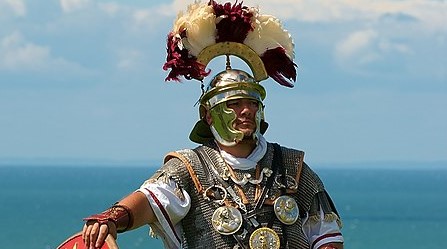 Centurions represented the Roman Empire, and their duty was to keep the peace. They were part of the backbone of leadership in the Roman military, and they oversaw a cohort of soldiers up to 80 troops. They took on a variety of roles including overseeing building projects, functioning as tax collectors, and leading security.

While there was not a Roman legion in Israel during Jesus’s ministry, Rome’s local client ruler, Herod Antipas had a small force of auxiliary troops. These troops would not have been Roman citizens, and many would have come from non-Jewish peoples from regions like Phoenicia and Syria.

So, it comes as a bit of a surprise that in Luke 7, we see Jewish elders from Capernaum appealing to Jesus for help to heal a member of this Gentile centurion’s household, his slave. We learn that this man had invested in the local community, building their synagogue (probably the one Jesus attended, since this was the small village where Jesus was living). An even bigger surprise is that Jesus ends up praising this man’s faith and his slave is healed.

When dealing with stereotypes and broad strokes, it can be easy to become divided and criticize the “other.” But this story speaks to the power of personal relationships and the ability to overcome animosity. Where there wider social problems beyond this encounter that needed to be addressed? Sure. Did this healing fix them? No. But it did bring healing to a slave within the local community of Capernaum.